I’ve always been a firm believer in “eating our own dog food”, so shortly after we launched Office 365 I switched one of my personal domain’s email over to it.

While Microsoft traditionally was focussed on Windows software only, in recent years their support for Mac users has improved dramatically and the Outlook app on the Mac is very close in functionality to the Windows version. (And the mobile app for iOS is really nice!)

If you have email in an Office 365 mailbox and are using Outlook you can access some interesting little features like the “clutter” inbox, which is a pretty good attempt at removing crud (think newsletters you never bother opening) from your main inbox and shoving it somewhere where it isn’t annoying you.

But where Office 365 gets really useful is when you start looking at the “add-ins” to Outlook. Some of them are free, while others will require a subscription of some kind, but the interesting thing for me is that there are “hooks” into a growing number of services that I already use.

For now I’ve only hooked into a couple of them as you can see in the screenshot above. Taking Evernote as an example, you can send the contents of an email into a notebook with a couple of clicks. The Wunderlist integration lets you create simple additions to your existing lists with one or two clicks.

So, for example, I placed an order for a Nest on Friday and have setup a reminder to check its shipping status on Monday all with a couple of clicks directly from my email inbox: 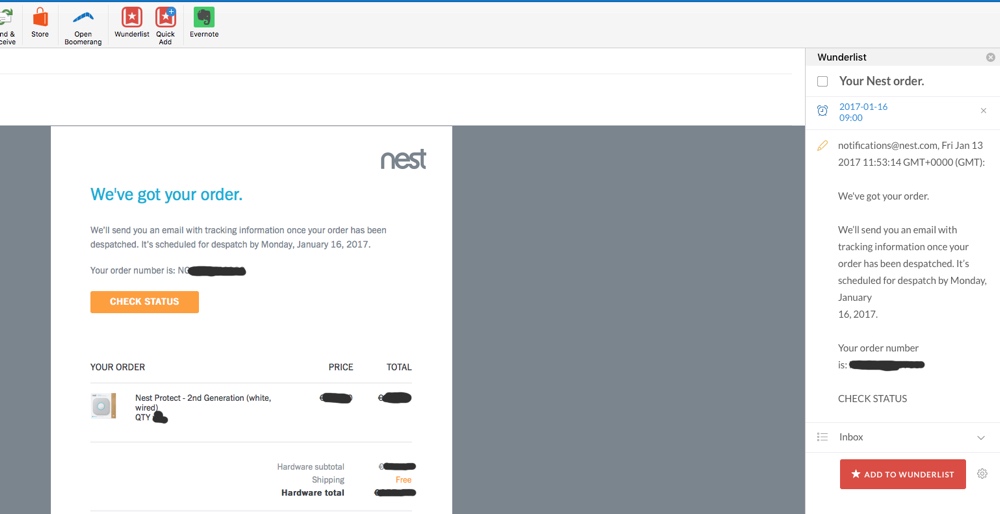 There are plenty of add-ins to choose from. Some might not be terribly useful to Irish users, but there are some that are specific to Ireland, such as the GAA fixtures one.

It’ll be interesting to see if more services that are available here in Ireland offer integrations, but for now what’s there is useful and is another good reason to use Office 365.