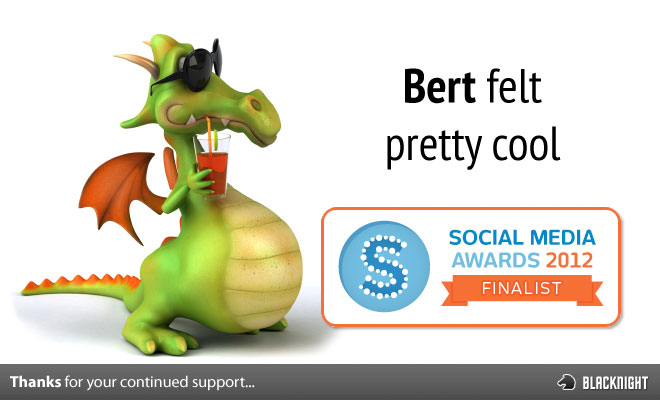 Bert and the entire Blacknight team are delighted that we’ve made it into the finals for the Social Media Awards.

The list of finalists was announced last night and we’re really honoured to have made it this far. Best of luck to everyone!

Here’s our press release on the announcement that’s going out this afternoon:

May 3, 2012 – Carlow, Ireland – Social media juggernaut, Blacknight is a finalist in four categories for the 2012 Irish Social Media Awards.

Held at Mansion House in Dublin on May 17, 2012, the second annual Irish Social Media Awards honor businesses in Ireland that raise the bar for Social Media use.

100 judges have helped bring the list of possible nominations down to just a handful of finalists. Blacknight are finalists in the following categories: Best Facebook Page for A Business (Owner Managed), Best Customer Care Using Social Media (Integrated), Best Blog of A Business, and Best Business Twitter Account Support, CRM.

Michele Neylon of Blacknight explains “We are ecstatic to be in the finals for four Irish Social Media Awards this year. We put a lot of care into our social media accounts and believe deeply in the importance of making a quality connection with our customers. I get teased a lot for the amount of time I spend on Twitter, Facebook and our blog but it clearly pays off.”

In 2011, Blacknight won the award for Best Business Twitter Account for Sales and Marketing at the inaugural Irish Social Media Awards.

Neylon advises: “It is no longer enough for businesses to simply have social media accounts. You have to put the heart of your business into connecting with your customers. Blacknight has always prioritised our relationship to our customers and have keep a constant dialog going and it has become an integral part of our business.”