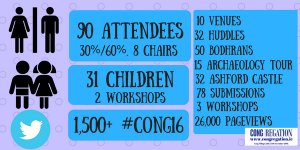 Cong village was once again invaded for the weekend by a diverse collection of consultants, teachers, academics, politicians, entrepreneurs, business owners, farmers, physiotherapists and psychologists who gathered to discuss the future at Congregation #cong16. 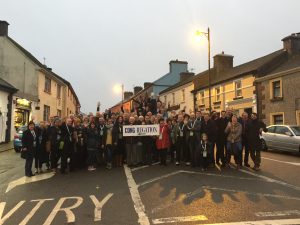 In the run up to the event all the participants produced a 600 blog submission which they presented on the day.

In its fourth year, the annual Congregation festival has expanded to three days from Friday 25th to Sunday 26th with over 90 adults and 31 children attending.

The centre piece of the event is the unconference that took place on the Saturday in Cong Village but a small group were also treated to a series of fascinating talks in the private cinema in Ashford Castle. Mike Mulligan from Ancestry.com narrated the fundamentals of DNA structure before mapping the evolution of man and migration through the globe and finally mapping DNA data onto insights from the early Annals linking family names and location. The layering of DNA data, although still early days has the capability to plug gaps in recorded histories and also to help answer population enigmas. 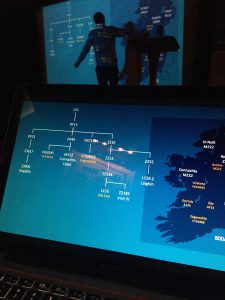 Archaeologist John Tierney spoke about using geolocation data to help piece together the truth and also shared a project where is has used data to plot the connection of Walt Disney’s ancestors to Dublin. Stephen Howell, SMARTlab UCD demonstrated how the computer programme scratch can help students create their own experience of what they learn in school. One programme he wrote and demonstrated showed how you could use Microsoft Kinect to move, control and interact with simple history character on a computer screen. He suggested that the real value of learning code was akin to learning to read and write. Not everyone will be an award winning writer but the basic literacy skills enables us to communicate. Similarly with coding, the aim should be to enhance learning than turn the country in to a nation of programmers. The final speaker Gar McCriosta from Mindrising who unveiled school projects where students created their own virtual versions of historical moments including 1916 on Mindcraft. 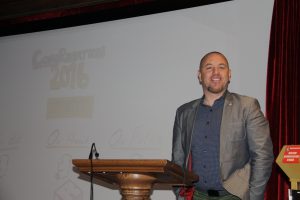 Schools around the country built virtual GPOs, soldiers in uniforms, created engaging narratives and songs, in the process changing mindsets on how school topics can be taught and deeply learnt. He finished his talk sharing the insights on how he is using these tools to enable students and others to start envisioning the future. At a recent event he gave a group of students the challenge of coming up with solutions to solve the health crisis in 2030. The range of solutions were fascinating and illustrated that with the right guidance, tools and openness that break throughs can be achieved. 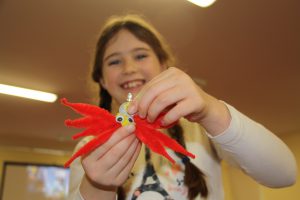 The following morning as the 90 attendees gathered in Ryans Hotel for their briefing a group of 31 children were being treated to workshops in the Crossroads Centre. Ranging from 4-15 they were expertly guided through building lego robots by Niall McCormack (Castlebar) of Colmac Robotics from scratch before eventually ppitching them against each other in Robot Wars. After lunch Hassan Dabbagh from Castlebar and Pamela O’Brien from LIT in Tipperary introduced the children to a selection of MaKey MaKey workshop activities from code breaking, making simple electrical circuits with diodes and batteries before creating start/stop animation and making electric pianos from fruit.

Themed around ‘The Future’, each attendee had produced a 600 word article of their vision, thoughts or perspective on what lies ahead for whatever area they wished to focus on. This was the basis of talks on the day and are all available to see on the Congregation site.

During the day each of submissions were presented in coffee shops, book stores, bars, restaurants, craft stores guided by a chair person who ensured three presentations at each huddle and moderated the discussion. 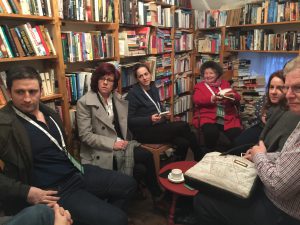 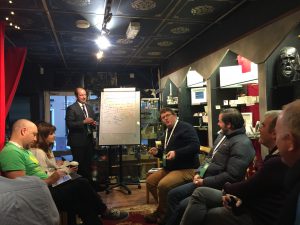 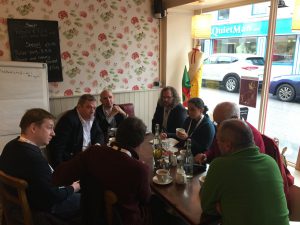 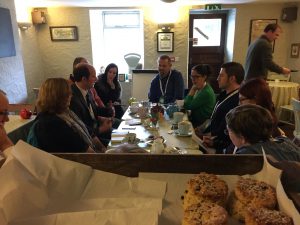 The mixed background of attendees and the range of topic areas reflected the challenge of looking into the future. Far reaching presentations into Artificial Intelligence, rise of automation, future transport were combined with individual thoughts on how we will work and play in the future. Although the depth and quality of information sharing on the day was extremely stimulating the real magic happened in the Q&A and subsequent conversations. Capped at 10 minutes the presentations act as a catalyst for conversation and also to give people a better understanding of the presenter. As the day evolved and barriers were slowing broken down perspectives on the future moved from disparate opinions to more personal and universal themes. Although there was plenty of conversation about flying cars to embedded chips the final exercise of distilling thoughts, perspectives and concepts to create a better future proved difficult. The final session revealed peoples fear about the future, the uncertainty about the here and now and thought started to focus on what type world do we want and what actually matters.

One group debated at length what a better future means and what actually makes people happy, rationalizing that a sense of community was what made people happiest. The truth is that the future not alone fundamentally questions what is possible but also what we want and need as a race. It also has deep psychological repercussions as many of us grasp with dealing with the next step and unable, fear of cannot see the point in looking beyond. 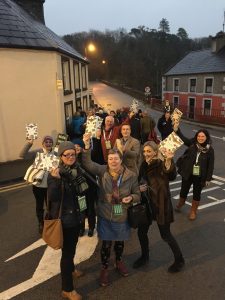 Finishing up at 4.30pm the group were treated to a one for everyone in the audience with a free copy of Chris Brogans book ‘The Freaks Shall Inherit the Earth’.

Following the annual photo at Cong Cross the conversations continued on at a conference dinner in Pat Cohan’s and Ryan’s Hotel.   The group finally convened at Danaghers Hotel where one of the attendees Sean McGrath guided everyone through a bodhrán workshop. Sean patiently explained the difference between ‘rashers and sausages’ and ‘black and decker’ as 50 people finally started to build rhythm together. 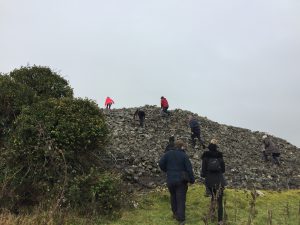 Despite the late night a bus tour on Sunday, led by Chris from the Quiet Cailin, introduced and explained the Battle Of Moytura with trips to the 5,000 year old Ballymagibbon Cairn, King Eochys burial mound with view of lough Mask that have changed little in millennia, the Standing Stone Circle in the Glebe before a gentle tour of Cong Abbey and its healing stone.

Congregation finally game to gentle stop as Chris broke into song on the stone bridge in Cong, the fish leaping in the water, a bat circling the group and the sun peeping out.

Surreal finish to a whirl wind brain storm of a weekend. With the virtual saw dust of Congregation still clearly visible, calls for details of next years event have already started.

The outline theme for #cong17 is ‘Innovation’ – Rethink, Disrupt and Rebuild with a final challenge of reformatting what we want in a better future for Ireland. It is expected that the mix of attendees will expand further.

Congregation has been sponsored by Blacknight for the last 3 years with Mayo.ie, Bank of Ireland and MKC Communications also enabling the event to take place.  All details of the event are available on www.congregation.ie with additional videos/photos on social media under #cong16.

The essence of Congregation is sometimes captured better by the attendees.  See Ina O’Murchu and Sean Fay’s thoughts about this year.

By Eoin Kennedy|2016-12-15T11:06:17+00:00December 5th, 2016|Categories: Events|Tags: Artificial intelligence, Cong, Deep learning, Elon Musk, events, google, Machine learning, mayo|Comments Off on An Unconference in the West Takes a Glimpse of the Future at #cong16

About the Author: Eoin Kennedy