In today’s podcast we meet Sean Brady from Cloud Assist. Sean is an evangelist for remote working and travel avoidance and he spoke on the topic at Congregation last November in Cong, Co Mayo.

In 2017 Cloud Assist was selected to participate in an initiative called the EU Climate Launchpad. That led them to become a 100% remote working company and they instituted a no-visit rule.

It was a risky move but it paid off, says Sean. “We realised it was actually of benefit to us, because we were able to tell our clients, the technology that we are talking about, we can actually help them because we’re doing it in real life terms”.

“By switching to a fully 100% remote working company we now, obviously, have less overhead. We don’t have the offices that we typically had before. Our people are more efficient and productive because they’re able to work in what we call deep working, so they’re not distracted by everyday office meetings – we have actually less meetings, but we’re more performance rather than presence. Performance, results, rather than presence 9-5, and that means that we were able to then take on talent that wouldn’t have been in proximity to our offices. So it’s changed everything” 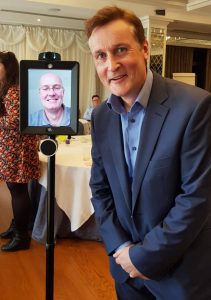 Cloud Assist has channelled its experience into practical assistance for companies embracing remote working technology and best practice. They are distributors for the Double Robotics virtual presence unit, which was a minor sensation at the first Grow Remote conference in Tralee last year. Sean is a founder member of Grow Remote.

“Grow Remote is a non-profit movement to help other people make this change, other communities, to actually make them more aware that there’s an opportunity for rural communities to take on remote workers, bring them into their community, get their euros back into the community rather than sitting up in Dublin or in some other city. And it elimates, obviously, congestion; there’s a stat where 40% of the workforce in the US would be applicable to remote working and, if that happened, 10 million cars would be taken off the road. That’s not 10 million journeys; that’s 10 million cars. So this thing can have huge impact on our society for the better; it can have huge impact on our work-life balance, but also a huge impact on our environment”

Since we recorded this interview, Blacknight became a sponsor of Grow Remote and attended its second conference in Tubbercurry, Co Sligo. The movement has had a string of successes in its first year, and last week it was one of the six awardees of funding from Social Entrepreneurs Ireland. It’s now organised in 10 countries and over 90 local communities around the world. They’ve held more than 80 local awarenesss and education events and trained 110 people in the skill of remote work. They will shortly launch Ireland’s first QQI-accredited remote working training course. Their mission is to make employment both visible and accessible to the communities that need it.

Blacknight is a sponsor of Congregation and entries are open now for Congregation 2019 which is on 22 – 24 November. You can’t buy a ticket for Congregation. It’s made possible by volunteer effort and sponsorship and there are no passive participants. Everyone who attends has earned their place by making a submission on the theme. Throughout Saturday, participants gather in groups known as huddles to discuss each others’ submissions – to learn and to teach.

It’s good fun with interesting people. This year’s theme is Community, and you can find out more at Congregation.ie.