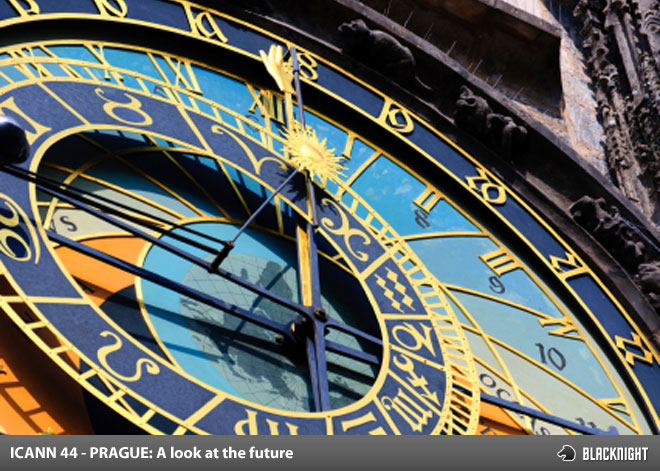 ICANN’s 44th public meeting is being held in Prague next week and we’ll be attending.

It’s one of the three public meetings that ICANN hold every year and they’re always pretty interesting events to attend.

First off, ICANN will be announcing the new CEO this Friday afternoon in Prague. Whoever it is will be coming to the organisation at a time when it faces a number of significant challenges.

While the actual official meeting does not start until Monday morning there will be plenty of meetings on over the weekend as well, which is why I’m heading to Prague on Friday.

So what’s on the “menu” for Prague?

ICANN has decided to split the applications up into “batches”. While this might seem reasonable at some levels a lot of people feel  that this approach is flawed. If your new TLD application ends up in the second or third round you’ll be at a distinct disadvantage to applicants that manage to get into the first round.

Even if you can see a logic in the batching concept this has been further complicated by “Digital Archery”. You can read more about the entire thing here, or get an alternative view here.

Expect to see lots of people talking about this one. Whether ICANN will come up with a better solution or not remains to be seen.

Also, on the subject of new TLDs, with so many companies competing against each other for the same strings you can expect to see some “action” as companies either try to pool their resources, buy each other out, or threaten to sue each other. (Did I mention that there were a lot of lawyers at ICANN meetings? 🙂 ) You might also see some emotional claims from some applicants that others have “stolen” their ideas.

Of course there’s also the “small” matter of Amazon, Google and some other big companies trying to make a land grab on some generics. I posted about this a few days ago and Phil Corwin also wrote about it quite eloquently here.

The RAA negotiations are going to attract a lot more attention at this meeting. ICANN senior staff and negotiating team from the Registrar Stakeholder Group (we’re a member) have been engaged in talks on an amended contract since late last year. While there is agreement on a lot of things it’s a negotiation, so there are still some areas where there isn’t any agreement yet. I’ve highlighted one aspect of this previously. ICANN have  published documents with their take on the current status of talks.

The new CEO will attract a lot of attention in the coming weeks and the meeting in Prague will be the first time that anyone gets to find out who they are..

The GAC, which is where most governments have representation (Ireland where are you??), has several meetings with different stakeholders throughout the course of the meeting. They’ll have plenty to say about new TLDs, the RAA negotiations and various other matters. Whether the interactions will be positive or not is always a hard one to predict. No matter what the GAC says, however, it cannot be simply dismissed.

Talking of governance .. Unless you’ve been asleep for the last year or two you may have noticed that governments and other international bodies are taking a much keener interest in what goes on online. Could the ITU want to takeover from ICANN and IANA? Expect that to be on the agenda in several sessions.

Of course Internet policy isn’t just about headline grabbing stuff. There’s also a lot of other items on the agenda including:

And don’t forget the Public Forum which is when just about anybody can wander up to the mic and ask the ICANN board and staff questions on just about any topic they like, or simply make a statement.

Most of the meeting is streamed online, most with video, but pretty much all with audio.

Of course I’d be lying if I were to say that an ICANN meeting was all work and no play. Prague is a gorgeous city, so hopefully we’ll be able to see some of it over the course of the week. Personally I’m tempted to make another trip to the  Museum of Communism – if nothing else they have some of the quirkiest souvenirs around.

We’ll also be able to use the meeting to catch up with a lot of our partners such as .co, .me, Verisign, Afilias, Neustar and many more.

I expect it’ll be quite a busy week!