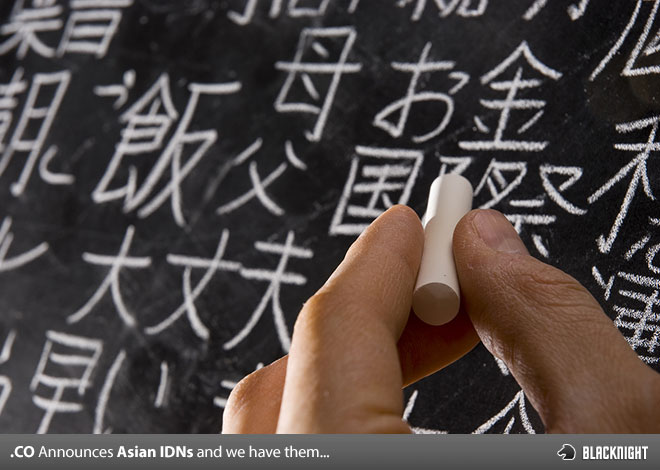 We’ve mentioned IDNs in the past. Basically an IDN domain name allows you to register using non-ASCII characters. At the simplest level that might be the addition of an accent to a vowel, but if your native language is Arabic, Greek, Chinese, Korean etc., then it’s an entirely different character set.

Of course IDN domain names are not without their own set of issues. Not all software fully supports them, so in some browsers the punycode (the xn-- bit) will get displayed instead of the actual domain name and email support is iffy at best .. but things are improving and a more internationalised internet is growing.

Here’s our release about the launch of Asian IDNs in .co:

Blacknight Announce Release of .CO Asian IDNs
Blacknight is one of an exclusive group of Registrars to carry these Internationalised Domain names.

May 10, 2013 – Carlow, Ireland – Leading Irish domain registrar and hosting company Blacknight announce that they are one of a small group of registrars to carry .CO’s new Asian Internationalised domains.

On April 15, 2013, the .CO Registry announced the global launch of Asian internationalized domain names (IDNs) for the .CO domain name. Internationalised domain names use native characters such as kanji instead of the more limited Latin character set.  The availability of additional global languages in the .CO namespace is intended to increase local interest and use.  Languages now available through .CO are Chinese, Korean and Japanese.

Only a select number of domain registrars are chosen by .CO Registry to carry the popular domain. Blacknight, which has been accredited to sell .CO domains since last year, supports the decision to add Asian IDNs.

Blacknight CEO, Michele Neylon explains: “As one of the few companies accredited directly with .CO, we are delighted to support new features that the registry offers. The Asia Pacific markets are growing at an incredible pace and support for IDNs by registries and registrars is a key part of the globalisation of the Internet.”

Internationalised domains have been growing in use and allow Internet users across the globe to communicate online in their native languages. The growth of the Internet user base caused by the availability of content in familiar languages and scripts is the backbone of the IDN philosophy.  Neylon Continues: “If the Internet is truly international than all people using it should be able to communicate in their native language. .CO is one of a handful of registries that really understand that to appeal to and be of service to all people, domains can’t be limited to ASCII characters.”

Blacknight are currently offering .CO Asian IDNs from €8.80 and suggest that they pair quite nicely with their Minimus and Maximus hosting plans (http://www.blacknight.com/compare.html)  where you’ll also be available to avail of substantial discounts.

To learn more about the suite of services offered by Blacknight or to register a .CO Asian IDN please visit http://www.blacknight.com

About Blacknight:
Blacknight (http://www.blacknight.com/) are an Irish based, ICANN accredited domain registrar and hosting company. Recipients of several awards for their revolutionary use of social media, Blacknight are one of Europe’s most cutting edge Internet companies. Blacknight constantly seek to lead the way by introducing innovative solutions for its client base and provide dedicated servers and co-location as well as a comprehensive range of Microsoft Windows and Linux based hosting plans and domain name registration services to business globally.