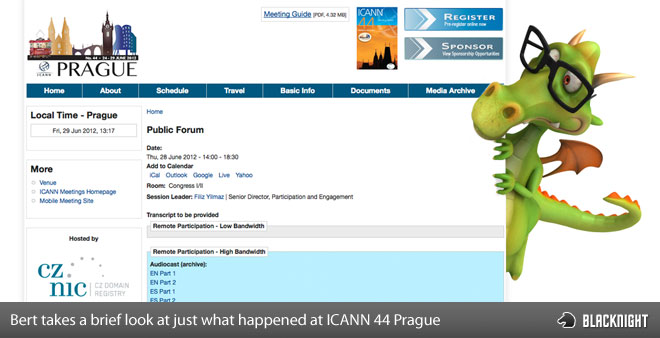 The 44th ICANN public meeting drew to a close on Thursday evening after the “public forum”.

It was a long and pretty eventful week so trying to sum it all up quickly isn’t easy and I’ll probably miss some key events.

First off ICANN has a new CEO. Fadi Chehadé was announced as the new CEO at a press conference held on the Friday before the meeting opened. He will take the organisation’s reins from October 1st 2012, while in the interim period Akram Atallah will be CEO.

The “changing of the guard” meant that there were 3 ICANN CEOs at the meeting last week, with Rod Beckstrom fulfilling his duties for the last time at this meeting.

Mr Chehadé  addressed attendees several times over the course of the week and was well received. It will be interesting to see what people think of him in 12 months’ time when he’ll have had a few months at the organisation’s helm.

So what actually happened at the meeting?

With the “reveal” out of the way the big question everyone had was whether ICANN would insist on using “digital archery” to assign applications to some kind of batching system. In the end the ICANN board decided that digital archery was not a good idea and cancelled it. Unfortunately they still haven’t stated clearly what is going to happen next.

ICANN is meant to be updating the community on “next steps” in the next few weeks. What is clear is that “batching” is pretty much dead. There will have to be some method for choosing which new domain extensions get delegated first, but actual “batching” won’t happen.

So far the GAC (where governments meet at ICANN) have raised concerns about two strings – .patagonia and .sas.

I’ve talked about this in the past. Over the course of the week registrars met with various members of the ICANN community to update people on the current status of the negotiations as well as to raise awareness of the issues that the current draft text proposed by ICANN raises.

Law Enforcement officials still want registrars (including us) to conduct verification and validation of domain name registrants BEFORE domains are put live AND also want an annual re-verification. If the annual check fails your domains could be suspended ie. all services associated with the domain(s) would cease to function.

Law Enforcement also want us (registrars) to collect and retain a lot of data related to the domain name registration transaction which opens up a number of issues related to security and registrant privacy.

What has been heartening to see is that several of the non-commercial stakeholder groups have expressed concerns to the ICANN board and others about the implications of the current proposals.

You can read the registrar stakeholder group statement that was released before last week’s meeting here and find all the other documents here.

It would be helpful if digital rights advocates and data privacy / protection authorities were to weigh in on some of the proposals.

As usual there were a lot of meetings involving the various ongoing policy discussions. There’s a lot of work currently underway to review a broad range of domain name policy and during a public meeting there’s a good opportunity to get input from people who might not be actively engaged the rest of the year.

I had mentioned that while ICANN meetings are hard work, they’re also a good opportunity to network with industry leaders. The main social event of any ICANN meeting is the gala. While some have been good fun I think it’s safe to say that the gala organised by our hosts in Prague was exceptional.

The next meeting will be held in October in Toronto, Canada. Hopefully we’ll all have a clearer picture of what is going on with New TLDs by then!