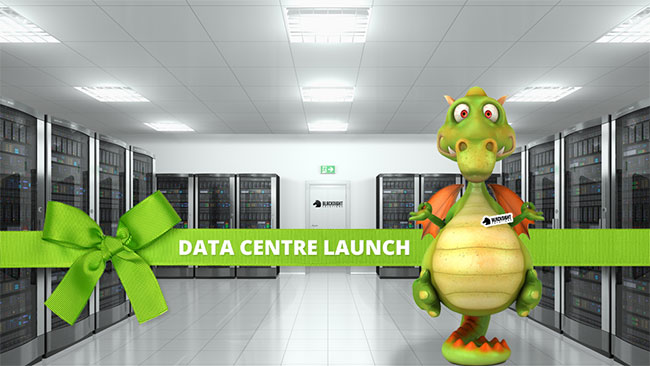 In a week’s time we’ll be officially opening our new data centre.

It’s been a long time coming and like so many other projects is, of course, behind its original schedule.

We originally announced that we were building our own eco-friendly data centre back in August of 2012. So we’re about a year behind schedule 🙂

We’ve posted a few photos of the data centre at various stages of completion via our Instagram account.

And we will be posting quite a few photos from the opening event next week!

So here’s the official release:

Founded in 2003 by Paul Kelly and Michele Neylon, Blacknight Internet Solutions Ltd, domain registrar and hosting company, is based in Carlow.

Appropriately, considering the nature of their business, the two men met online and had decided to set up the company together before meeting face-to-face.

Paul is responsible for all things technical and has overseen the building of the Data Centre, while Michele looks after marketing, PR, policy and legal matters.

Over the last decade the company has expanded from one employee to 35, and continues to grow.

Blacknight started business in a bedroom in Paul’s sister’s house and moved into its current building in Barrowside Business Park, Graigecullen, Carlow in 2004, when they took on their first employee. As the company grew, so did its premises, so now it occupies the entire building of 12,000 square feet.

Today it has over 70,000 direct clients and hosts approximately 220,000 websites on behalf of its customers in over 130 countries, throughout the EU, in Asia, and in North and South America. They range from hobbyists to small businesses, multi-nationals, even governments.

You may wonder why they decided to build their own state of the art Data Centre now.

Unlike other sectors of the economy, the online business is growing and Blacknight has a constant need for more data centre space for its clients.

Building their own Data Centre means that they were able to take advantage of the latest technologies. They were also able to design and build an environment to suit the company’s specific needs, while also making sure that their entire operation is more efficient. To have expanded into one of the existing data centres in Dublin didn’t make sense financially. In Carlow they are able to control costs, which in turn will help further expansion.

The Data Centre build has cost about €1 million for phase 1, assisted by some private investment and finance via Bank of Ireland and AIB. That initial outlay includes putting in some of the underlying infrastructure for phases 2 and 3 which they plan to proceed with in the future.

The project required installing an ESB substation on site, which is powerful enough for a small town. Data centres use a lot of power, not only for the servers and other equipment, but also to keep them cool. With older data centres that can mean that for every kW used to power servers another KW is needed to cool them.

Blacknight’s new Data Centre is eco-friendly, using “free cooling” for most of the year; the flow of air is tightly controlled, hot air expelled and ambient air pulled in from outside. With our “balmy” Irish weather most of the year the air doesn’t need to be chilled, but for those rare days when it does there are chillers installed.

Over the past 18 months, while the Data Centre was being built, Blacknight has also invested heavily in expanding its management team and has brought in experienced staff, including a CFO. The company recently received its first State support from Enterprise Ireland, which is assisting with its staff expansion