You know those blog posts that you start, come back to, restart, completely scrap and then start again? This is one of those posts.

This weekend saw myself and Michele our CEO heading for Leiden, Holland. Fun fact Leiden is the home of Armin van Buuren, but unfortunately for us he wasn’t the chosen DJ for the after party.

Yes Holland really does appear to be the land of tulips, windmills and bicycles!

Why on earth were we in Leiden? (Yes I had to look it up to figure out where on earth it was) We were there because it was the very first WordCamp Europe and we were sponsors.

If you’re not familiar with what a WordCamp is they are informal conferences generally run by the community around the the topic of WordPress. 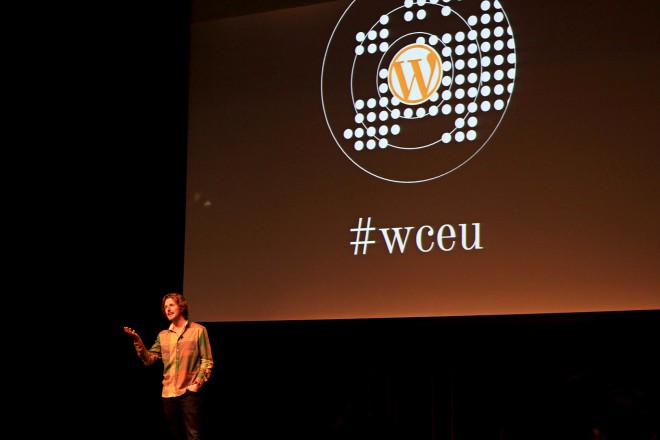 To be honest I didn’t really have a clue what to expect. I don’t know that many people in the European community apart from some Irish users. For the sponsors and organisers the event kicked off with a welcome dinner on the Friday which I thought had a pretty big crowd. I got to meet up with the Dot Me people who we’ve worked with on various projects in the past. The most recent being our joint partnership for TBEX Dublin (Travel Bloggers Exchange).

For me it’s always fun to meet people you’ve worked with for years but never actually met or spoken to, though maybe it’s just me this happens to?

The actual WordCamp event kicked off on Saturday morning bright and early, though as we were a bit away from the venue we arrived rather late but just in time for a coffee.

Once the introduction speech was over with we were right into the presentations and first up was Vitaly Friedman from Smashing Magazine.

A lot of his progress over the years echos my own, though obviously with him having quite a bit more fame than I do. Next up was a BuddyPress / Multisite case study with Roció Valdivia which gave an interesting insight into BuddyPress and running multiple sites not to mention a nice list of plugins in use. (It’s always nice to hear about interesting plugins and with 9000+? you don’t always get to hear about them).

Unfortunately as with many events there were two tracks and you can’t be at both. I mostly attended the “Earn” track (insights into working with WordPress) the other track being the “Build” track and a lot more technical. I’m hoping over the next while the videos from the event will be available on WordPress.tv as in my opinion they are well worth a watch.

While I won’t go into everything from the WordCamp I will give you a few details.

The biggest eye opener (maybe a bad choice of words) for me from it all was a talk by Bram Duvigneau on Practical WordPress Accessibility.

If you’re not heavily involved in accessibility you might think it’s simply a matter of providing alternative descriptions of images and labelling things nicely.

Bram didn’t have any slides for his talk.

He has been blind since birth and let us see some of his on-line world and the challenges he faces. When you can’t use a mouse to click things when everything is done by keys the little things like a nicely structured HTML document … think header tags that make sense and aren’t just something you use for SEO, keyboard accessible links and shortcuts, and skip to content links. 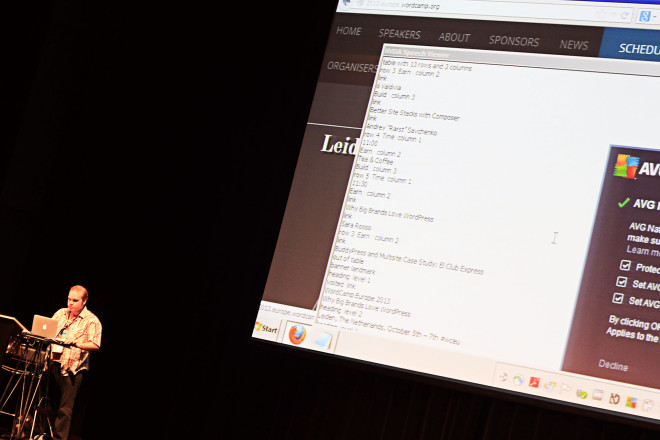 Other highlights of course would be the Q&A section with Matt Mullenweg (co-founder of WordPress) where he spoke about some of his vision for the future of WordPress. Did you know over 20% of the websites of the world are now powered by WordPress?

I’ll leave you with a few bits of information (Not to mention links to some of the slides from the great presentations). WordPress 3.7 is due out later this month. WordPress 3.8 is due for release in December.

I’m looking forward to the next WordPress meet-up and my currently feeling is, I’d like to be more involved in the community as there really was a great bunch of people there. 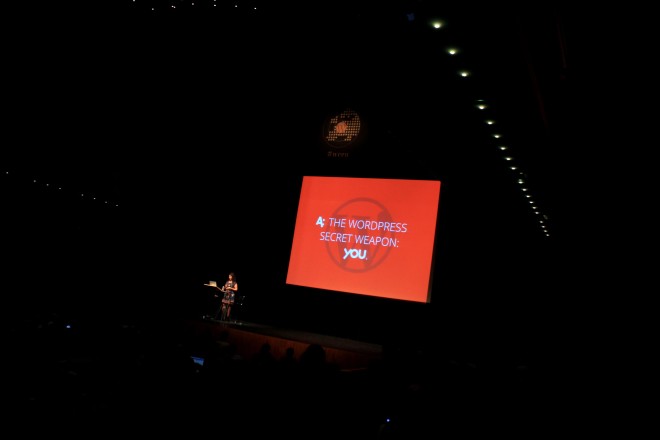 Looking for the slides? 🙂

Herding Cats with the BuddyPress Activity Component – Boone B Gorges

On Internationalization (Plugins and Themes for the Whole World) – Otto