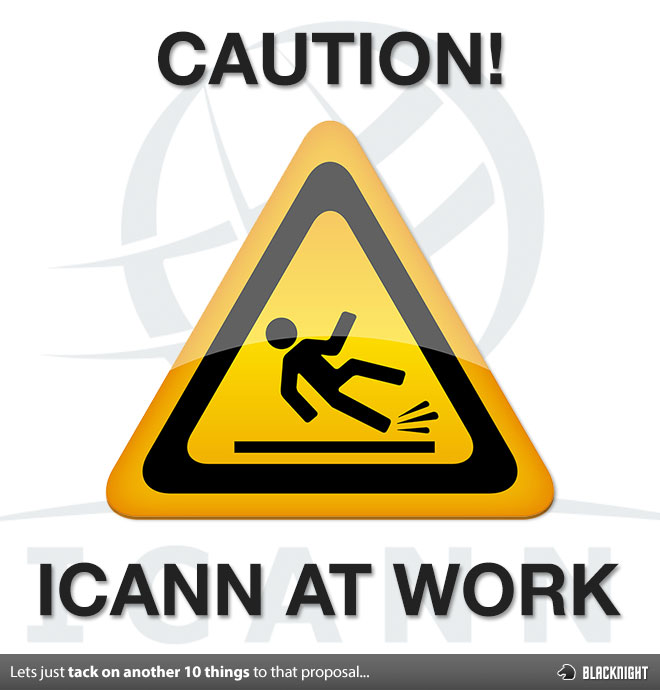 Blacknight are an ICANN accredited domain registrar. We’re the only Irish company to have ever been accredited by ICANN and it’s something we’re very proud of.

But what on earth does that actually mean?

It means that we have contracts and agreements directly with both ICANN and the domain name registries (Verisign, Afilias, Neustar, etc.). At a practical level this level of engagement means that we can provide a better level of service to our customers than companies that resell domains via 3rd parties. We’re also very active and vocal within ICANN on matters of policy that we feel are important. They’re important to us, they’re important to you. We always try to act in a manner that is positive for all parties involved.

As we mentioned in the past, there has been an ongoing series of negotiations between the registrars and ICANN on a new contract. ICANN wanted to force a lot of big changes through which we categorised as being an effective criminalisation of our customers. While the talks progressed we (the registrars) were able to concede several points, but still preserve our clients’ rights. Unfortunately the entire thing seems to have fallen apart now.

ICANN came back to the negotiations last month. We were close, oh so very close on so many items, but ICANN weren’t happy – they introduced new elements at the 11th hour! They also made the RAA a critical part of the new TLD process! (If you feel like going “huh?” at this juncture it’s a normal reaction, we didn’t understand where this came from either)

And then this week ICANN decided that they were going to publish the documents whether we’d reached agreement or not .. talk about premature!

We are not impressed ..

Here’s our (the Registrar Stakeholder Group) statement on this :

After nearly 18 months of negotiations with ICANN over a new Registrar Accreditation Agreement (RAA), formal negotiations have concluded. The posting of a “proposed” 2013 RAA by ICANN for public comment signals that ICANN staff believes that negotiations have concluded and the remaining issues will not be resolved.
The Registrars’ NT disagrees. To be clear, this is NOT the outcome that registrars wanted, and they remain ready and willing to continue negotiations.
Prior to the Toronto ICANN meeting (October 2012), all parties acknowledged that they were very close to agreement on all remaining issues.  The process appeared to be reaching a favorable conclusion and when ICANN CEO Fadi Chehadé communicated his desire to have RAA negotiations wrapped up by the end of 2012, registrars felt it was an ambitious timeframe, but one worth pursuing for the benefit of all parties.
When negotiations finally resumed in February 2013 much to the surprise of registrars, the few remaining issues were not the only items under discussion. ICANN staff presented a list of 10 brand new items for inclusion in the agreement, under the pretext of enhancing the “public interest.” Furthermore, these new items came along with an arbitrary deadline and decision to link the 2013 RAA to the new gTLD timeline.
Among these new demands was a Registrant Rights and Responsibilities document (R3), a temporary privacy accreditation program and a requirement that registrars accept and implement recommendations of the WHOIS Expert Working Group, which had yet to be formed and whose work is just beginning.
Although registrars were surprised by these new demands, registrars worked in good faith with ICANN to accommodate its intentions. For example, registrars consulted with their members to fine-tune the R3 document to make it easier to understand and readily translatable in other languages.
Some of the other new items for inclusion transcend the RAA and could affect the entirety of the multi-stakeholder model.  For example, ICANN insisted on including a proposed Revocation (or “blow up”) Clause that would have given them the ability to unilaterally terminate all registrar accreditations. After major pushback, ICANN staff relented and in its place proposed giving the ICANN Board the ability to unilaterally amend the RAA. This is identical to what ICANN inserted into the proposed new gTLD registry agreement–a clause met with strong opposition not only from the Registry Stakeholder Group but from the broader ICANN community.
The effect of such a clause in the primary agreements between ICANN and its commercial stakeholders would be devastating to the bottom-up, multi-stakeholder model.  First, it will effectively mean the end of the GNSO’s PDP, as the Board will become the central arena for all controversial issues, not the community. Second, it creates an imbalance of authority in the ICANN model, with no limits on the scope or frequency of unilateral amendments, and no protections for registrars and more important registrants.
In addition to the new items for inclusion there was a surprise announcement that all new gTLD registries must only use registrars that have signed the 2013 RAA, a transparent effort by ICANN to arbitrarily link the new gTLD program to the outcome of RAA negotiations. This requirement would create separate “classes” or “levels” of registrars, which is unprecedented in the DNS industry.  There can and must be only one meaning of “ICANN-Accredited.”
All of the items that have been agreed to over the past 18 months would, by themselves, produce an RAA that is vastly improved over the current 2009 version. If adopted, that RAA would significantly raise performance requirements for every ICANN accredited registrar and bring dramatic improvements to the domain name ecosystem. Nearly all of the Law Enforcement requests that were endorsed by the GAC have been included, as well as the major items that were requested by the GNSO are included in that RAA. That RAA would bring registrant verification. That RAA would bring enhanced compliance tools.
Registrars must emphasize that the key differences between that RAA and the one currently proposed by ICANN are not issues raised by Law Enforcement, GAC or the GNSO but by ICANN staff.
It now moves to the greater ICANN community to review these competing draft RAAs, and registrars look forward to those public discussions.  We welcome engagement with all stakeholders on the new 2013 RAA, and what it means for registrars, registrants, and the management of the DNS as a whole.

If you want to read all the documents they’re all here.