We’ve already celebrated the 25th birthday of the World Wide Web. On 12 March 1989 Tim Berners-Lee submitted his original proposal for a distributed system of hyperlinked documents on the internet.

Just over two years later, the web went public, when Berners -Lee began posting details of The WWW Project on newsgroups, beginning on 6 August 1991. It was cross-posted to other groups over the following two weeks. Apparently August 23 1991 is known as Internaut Day, the date from which access to the World Wide Web technology was publicly available outside CERN.

Do we need another Internet Anniversary? Of course not. But Facebook have decided to celebrate it today. Some might say they have more cause for celebration than anyone else.

I remember attending a trade show in 1994 in the RDS (Communications ’94, I think it was). There was a lot of interesting technology on show, and I was particularly interested in ISDN. But the stand which was busiest that day was Ireland Online.

By then, IOL had dial-up points-of-presence in Dublin and Galway, and sold monthly subscriptions, with a 1.44MB installation floppy containing the Netscape 1.0 browser, Eudora mail client, a Usenet reader and Trumpet Winsock.

Everyone in my generation has a watershed moment like that, marking the division between before and after the web. Those who are younger can only imagine what it was like not to be connected to the rest of the planet in the way we are today.

The potential of this technology is mind-boggling, but are we truly taking advantage of it? 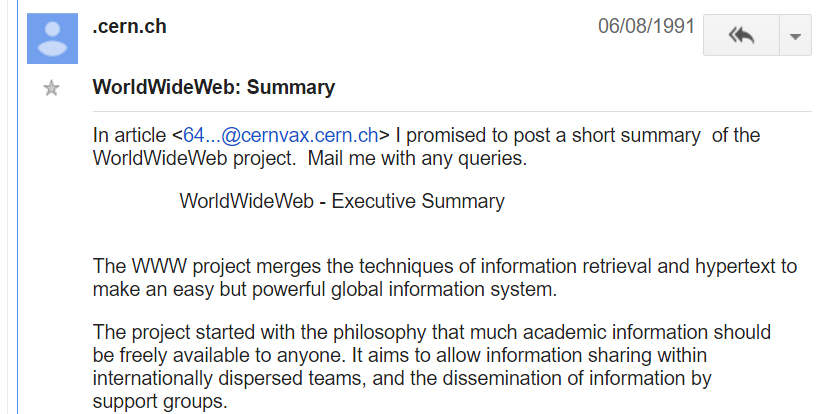 It’s a little ironic that Facebook is leading the celebration of Internaut Day, now that we have learned to take this revolutionary technology and use it to entertain ourselves with news we agree with, things we like to hear, a comforting network of friends who think like us and reinforce our biases. Like the proverbial frog in the pot, we may not have noticed the water boiling, but for one man who was deprived of the web for six years, the change was startling.

Iranian blogger Hossein Derakhshan was released from prison in 2014, to discover that the once wonderful web has been watered down.

Writing in The Guardian, Hossein says that the hyperlink has been “devalued, almost made obsolete” in this new world of apps and streams controlled by companies like Facebook and Instagram.

Some networks, like Twitter, treat hyperlinks a little better. Others are far more paranoid. Instagram – owned by Facebook – doesn’t allow its audiences to leave whatsoever. You can put up a web address alongside your photos, but it won’t go anywhere. Lots of people start their daily online routine in these cul-de-sacs of social media, and their journeys end there. Many don’t even realise they are using the internet’s infrastructure when they like an Instagram photograph or leave a comment on a friend’s Facebook video. It’s just an app.

As we celebrate the launch of the new .BLOG domain, it’s striking how old fashioned the values of openness and internet freedom appear, as exhibited by the new registry’s owners Automattic, the company behind WordPress.

Today’s social networks are powerful tools, but are they destroying the World Wide Web? If so, can we fix it? Can we find our way back to the future promised by Tim Berners-Lee’s revolution? Hossein Derakhshan concludes:

I miss when people took time to be exposed to opinions other than their own, and bothered to read more than a paragraph or 140 characters. I miss the days when I could write something on my own blog, publish on my own domain, without taking an equal time to promote it on numerous social networks; when nobody cared about likes and reshares, and best time to post.