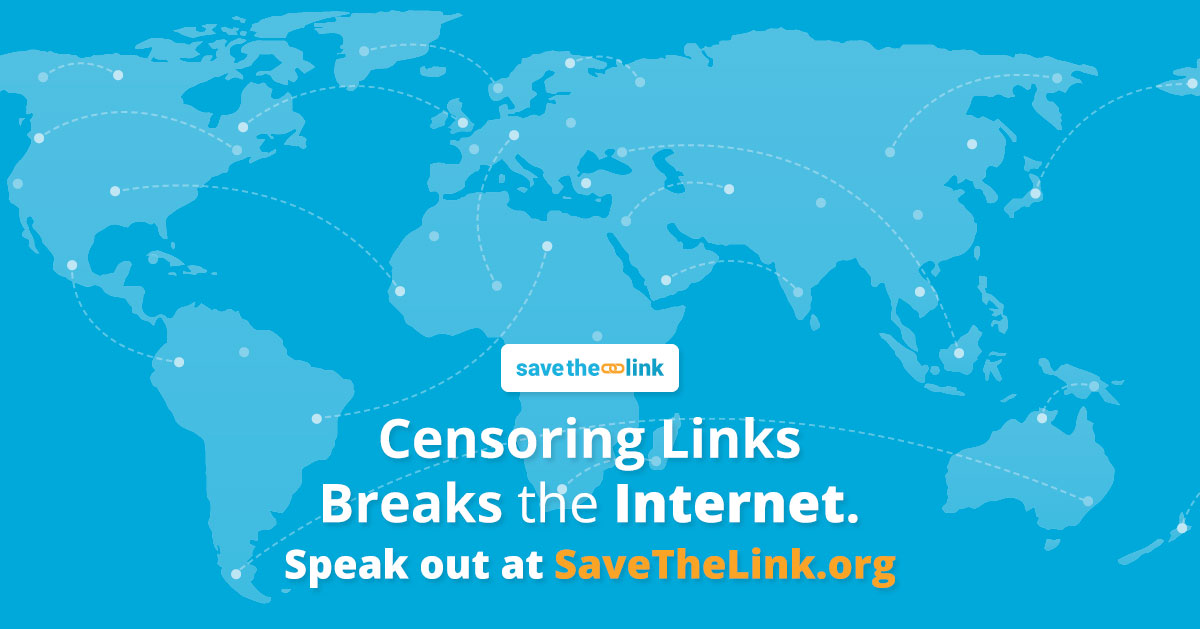 Links. They are what drive the web. The humble link is how we connect one website to another, how we share those funny cat videos, those emotional moments, the stories of the day. If it’s on the web then you need a link to reach it (somehow).

But what if you had to get permission to link to another website?

What if linking to a website you found interesting was deemed illegal?

While this might sound a little odd, it’s not fantasy. It’s already been happening and, depending on which country you’re in, this problem could become more pervasive.

So we at Blacknight have signed on to a campaign to help “save the link”. That we even have to do this is nutty, but reality is often stranger than fiction!

You can read more over on the official campaign website and if you can sign on to help spread the word.

So what’s this all about?

Read the official press release to get a better understanding:

May 6, 2015 – A large network of over 50 organizations from 21 countries is coming together to “Save The Link”. Today, the network is launching a multilingual international campaign aimed at pushing back against efforts by powerful media conglomerates to censor links and stifle free expression on the Internet. One of the proposals being advanced could make users personally liable for the content of websites they link to online.

The campaign launches as legislators in the EU are considering a major copyright review, including amendments to the European Union’s Copyright Directive that experts say would fundamentally undermine the right to link. In addition, a recent leak from the European Commission reveals measures that could force online companies to monitor the activities of Internet users in order to block content in other countries.

In tandem with the launch of the campaign, organizers have set up a Thunderclap social media amplification tool demanding that legislators protect the right to link. The message will reach over 1.4 million people.

Considering some of the world’s most popular web services are based in the EU, the proposals have implications for Internet users and businesses everywhere. Commenting on the launch of the campaign, OpenMedia Campaigns Coordinator Meghan Sali had this to say:

Sali continued, “The overall proposals from European Parliament Rapporteur Julia Reda are sensible and forward-thinking, and have been acclaimed internationally as a model for global best practice. Sadly, a number of the amendments proposed by other MEPs are frankly irresponsible. If implemented, these extreme amendments would undermine the Right to Link and ruin the Internet as we know it.”

Save the Link Network partners also spoke out on this issue:

COMMUNIA, International Association on the Public Domain: “Europe is in danger of limiting access to culture and knowledge by undermining the right to link.”

Jim Killock, Executive Director of Open Rights Group: “From finding information and sharing our views to joining campaigns and signing up to events – we all use links on a daily basis. Without them, these every day actions would no longer be easily available to us. This would threaten our right to freedom of speech, and deny people around the world the opportunity to engage fully in society and the digital world. Without links, the web cannot function. Threaten links and you threaten the web.”

Caroline De Cock, Copyright 4 Creativity (C4C) coordinator: “Hyperlinking is one of the most fundamental and basic activities of Internet use (by sharing a link on social media, making comments, writing a blog, etc.). The provision of a link pointing to a work or other subject matter protected by copyright should under no circumstances be subject to the authorisation of the rightholder, nor should it induce liability, as the content to which a link points can be changed at all times.”

Ryan Merkley, CEO of Creative Commons: “At its core, the Internet is a network of links — connectivity is at the heart of the Web we love. Breaking that structure by giving some the ability to decide what links should work and what links should not undermines free expression, access to information, and the public commons.”

Jeremy Malcolm, Senior Global Policy Analyst at the Electronic Frontier Foundation (EFF): “There are many threats to speech online, but perhaps none that so fundamentally undermine the fabric of the Internet as those that would constrain our freedom to link.”

Carolina Rossini, Public Knowledge Vice President of International Policy: “Sharing information online through hyperlinks is crucial to our freedom of expression. Linking, a core element of how the Web works, enables us to seek, receive and impart information regardless of frontiers, letting us share ideas beyond boundaries. Links are a critical component to the Web, allowing communities to flourish and relationships built on trust and collaboration to emerge. We must join forces across the globe to protect the right to link in Europe and elsewhere, and to ensure the Web doesn’t break into pieces.”

From proposed new changes to copyright law in Europe, to new takedown demands imposed on web services in several jurisdictions, to a range of Internet censorship activities revealed in the Sony hack, threats to the right to link are emerging around the world:

Already, over 20,000 people have spoken out at SaveTheLink.org