Podcast: Kathy Kleiman on the Women who Invented Coding [Audio]

Podcast: Kathy Kleiman on the Women who Invented Coding [Audio]

Our guest on today’s podcast is Kathy Kleiman, an expert in internet, free expression and intellectual property law. For her day job she works on the public interest/NGO side of internet governance, but it’s her research and advocacy on behalf of the women who were the world’s first computer programmers which has led her to make three documentary films, and helped to inspire women in technology with the story of the female pioneers of computer programming.

Kathy’s work was inspired by her search for role-models as a female undergraduate in computer science. She came across photographs taken in 1946 at the launch of the world’s first electronic computer, ENIAC (Electronic Numerical Integrator and Computer). The photographs included both women and men, but only the men were named. Who were these women, Kathy wondered? She embarked on a mission of discovery which led her to find and befriend the women who formed the original ENIAC programming team.

To this day people don’t know … that there were so many women in early computing and early software. That we don’t know that seems to be a big problem. We’re trying to encourage girls, minorities, everyone to go into STEM, and yet we don’t know who our pioneers are. 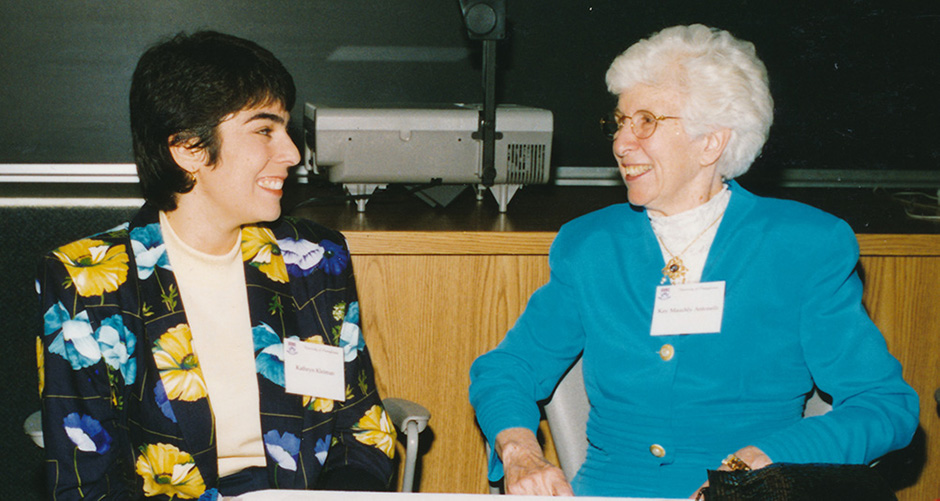 Kathy Kleiman (left) with Kay McNulty Mauchly Antonelli, the Irish woman who was one of the original six ENIAC programmers.

If the original ENIAC programmers appeared to have been airbrushed from history, it wasn’t the fault of their male colleagues, Kathy explains. In fact, the male engineers had a great deal of respect for the programmers.

When the women talk about being part of the ENIAC team, they talk about being part of a team that they took great pride in. So, my take-away from that is that the first programming team for the first modern computer was actually very diverse … and the women were treated with respect … but somehow that respect never became public, and on the day ENIAC was unveiled to the world, it was demonstration day, February 15 1946, and ENIAC is unveiled to the world, and it runs this very complicated differential calculus programme which the women programmed, the men, the engineers are introduced, the army officers were introduced, and the women are not introduced. Maybe there wasn’t enough time, maybe there were already too many people, maybe it was because they were women. And so they kind of didn’t get put into history because no one ever knew what they did, but the team did and they’re still really proud of the team.

The war starts, and suddenly the US military is desperate for women in all sorts of occupations. So men are going off to war and the country needs women in the factories, to make the munitions, to make the tanks. They need them in the farms because somebody has to harvest, and it turns out they need them in mathematics to calculate ballistics trajectories, that’s the differential calculus equation for an artillery trajectory: the path of a missile from the time it leaves the muzzle of a gun until it hits the target. So these very very complicated calculus equations were calculated by hand at that point, and it took 30 to 40 hours to do one by hand.

The military went out, first in Philadelphia, then to New York and across the country, looking for women with mathematics backgrounds to calculate these ballistics trajectories, and all of the women who became programmers answered the army’s call for women math majors and did an extraordinary job during the war. Some of them spent several years hand-calculating ballistics and then the army chose six to programme ENIAC.

Kathy has made a film, The Computers, which tells the story of the ENIAC programmers. She has toured the world with the story, and encountered an enthusiastic response, especially from women in technology.

That first film, The Computers, was followed by a second The Coders, and a third called The Future Makers. All three films are distributed via a site called Women Make Movies.

What is the message of the films?

I think the message is that we all belong. We were all there at the start. Women and men were at the start of modern computing and we all belong there today, and if we’re going to develop the best technologies, if we’re going to expand the internet to the next 2 billion people we need everyone, and everyone who’s excited and interested in computer science. So the message is: don’t play with stereotypes and don’t listen to negative messages. Find the positive messages and find the pioneers – cause they’re amazing!

This is the second in a series of podcasts and blog posts by Blacknight on the subject of women in technology and entrepreneurship. The series is brought to you by .CO, the top-level domain for entrepreneurs and startups. Visit BeCourageous.CO to find out more about the .CO Membership Program. Members enjoy access to industry events and networking functions, and get access to special deals, as well as having the opportunity to promote themselves to the .CO community.

Next week, we’ll bring you a podcast with Kim Mackenzie Doyle, President of the Institute of Designers in Ireland, who will launch an initiative on International Womens’ Day, March 8, to encourage women to choose careers in design.

Featured Image: ENIAC Demonstration in February 1946. Courtesy of the University of Pennsylvania.