I Love My BRICS

I Love My BRICS 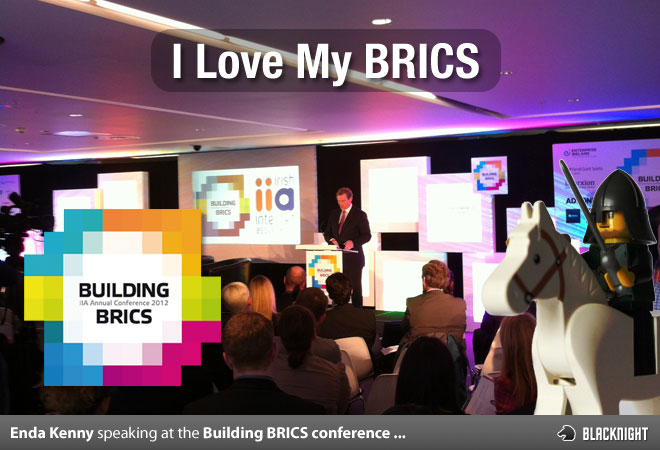 In a rare occurrance yesterday Michele Neylon, Managing Director of Blacknight,  put on a suit. It wasn’t however for a funeral as one might expect when you’re dealing with Michele and suits. It was hopefully for the birth of something great. It was of course if you’ve been following any of our recent blog posts for the IIA’s BRICS conference for which we’re one of the key sponsors.
One staff member with Blacknight commented on the suit situation “I felt a great disturbance in the Force, as if millions of T-shirts cried out in terror and were suddenly silenced. I fear something terrible has happened.”

We attended in numbers (hey two is a number too) and we weren’t disappointed by the day’s events.

Rachelle one of our sales executives attended a number of the days sessions ( there were two running ) and she was pleasantly surprised by the quality of the presentations. Highlights of the days sessions for her was Sean O’Sullivan talking about the difficulties he and other companies are having finding and retaining staff. (Did we mention we’ve a number of positions open at the moment as we’re expanding). The shortage of staff session led on to the great CoderDojo session which if you’ve not checked it out and have kids of a certain age or are able to help out you should. Piers Dilon-Scott gave a talk on monitoring social media interactions. Then it was onto one of the more BRICS focused talks and “On the ground in China” by Denise McQuaid. BRICS if you’re not aware of it is the term used to describe the emerging economies of Brazil, Russia, India, China and South Africa and the underlying theme of the conference. Denise spoke on cultural and practical differences encountered. As a company with customers in around 100 different countries in the world we’re well aware of some of these.

One of the key speeches of the day was from Enda Kenny ( We knew there was a reason Michele was wearing a suit ) All in all rather good day. Much talking and networking was done, business cards handed out and of course should you wish to get in contact and were attending on the day you should now have our business cards if not you can still get in contact.