Making Ireland Click is a new four-part television series aimed at promoting digital literacy in Ireland. Episode 1 will be broadcast on Monday 31 October at 7:30pm on RTÉ One.

The show follows Oscar winner David Puttnam, who is Irelandʼs Digital Champion, as he travels around Ireland on a mission to get citizens connected. Each episode will examine a different aspect of digital participation in Ireland. 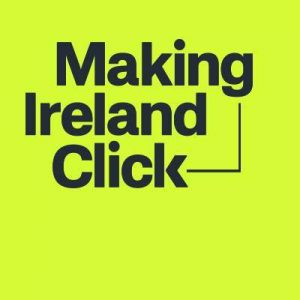 Making Ireland Click is produced by Wildfire Films for RTÉ, with the support of the BAI Sound & Vision Fund.

In addition to the TV series, there is a website at MakingIrelandClick.ie with additional content, including specially produced ‘webisodes’, which complement the broadcast programmes. And each part of the series is supported by a social media campaign aimed at encouraging viewers to become digital champions for their own communities, families and  friends.

Next Monday’s episode, ‘The First Click’ will focus on people who haven’t fully embraced the digital world. A social media campaign is encouraging people to #HavetheTalk with someone who could use a little guidance and encouragement to take the first step online.

The first online mini-documentary features someone who is an inspiration to the older generation in his use of technology. Veteran GAA commentator Mícheál Ó Muircheartaigh describes his laptop computer as his “best friend” – as it helps keep him in touch with his interests, and with family and friends around the world.

Blacknight is proud to support Making Ireland Click. We’ve provided free web hosting for their website, and we’re excited about spreading the message of digital literacy for all.

Making Ireland Click, Episode 1 goes out on Monday 31 October at 7:30pm, on RTÉ One.