108 New .IE Domains Registered Every Day – 2017 the Strongest Year Ever

108 New .IE Domains Registered Every Day – 2017 the Strongest Year Ever

2017 was the strongest year on record for registrations of new .IE domains, but it’s likely to be beaten by 2018 as registration rules are relaxed in March.

The increase was driven by nationwide demand, with new registrations up in all but four counties on the island of Ireland. Corporate bodies and sole traders made up the majority of new .IE registrations (67 percent) in 2017.

In Ulster, new registrations increased by 23 percent on the previous year; in Connacht by 21 percent; in Munster by 19 percent; and in Leinster by 14 percent. 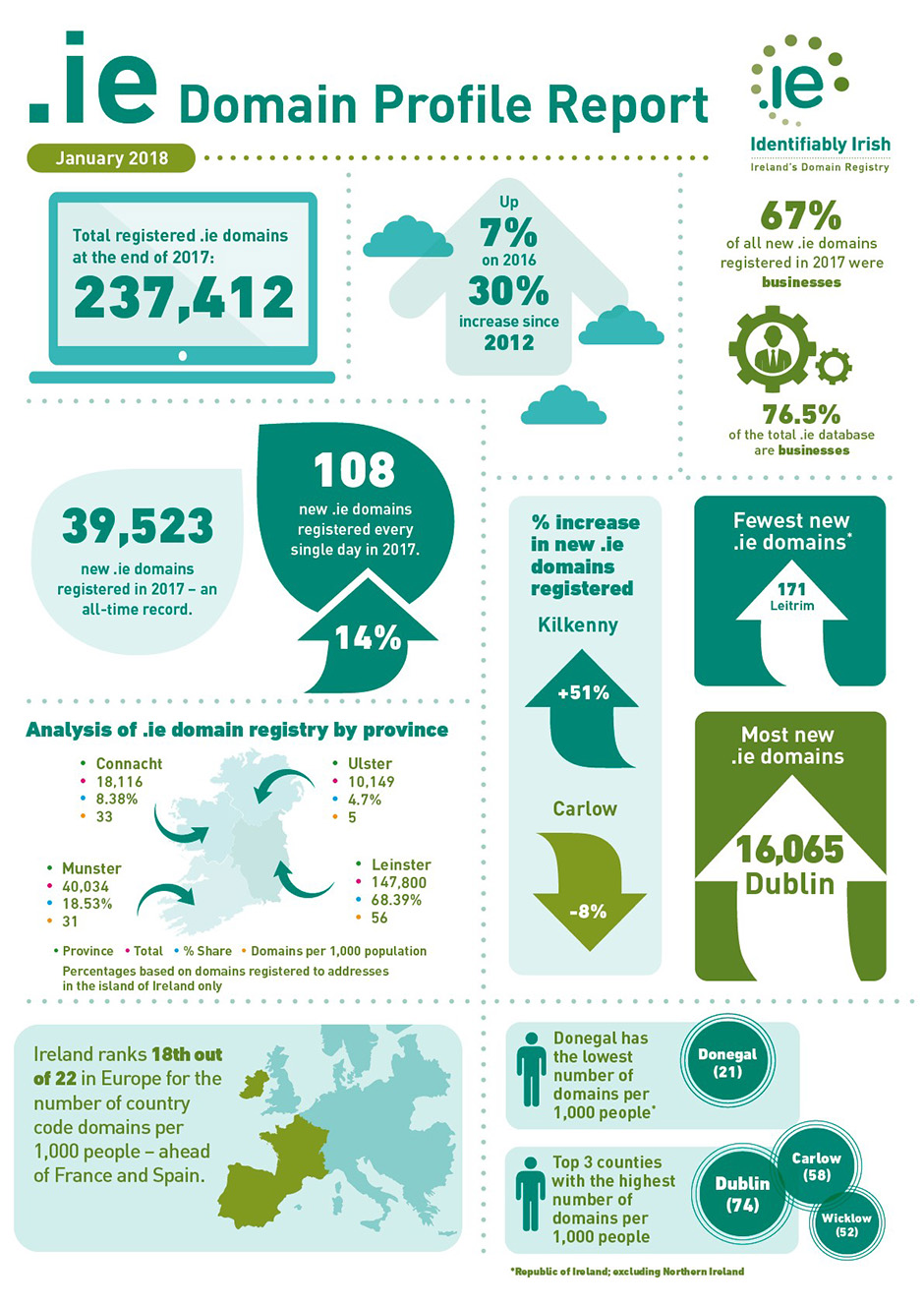 Despite the national increase in registrations, Ireland still lags behind its European neighbours for the number of country domains per 1,000 people. With 50 .IE domains, Ireland is 18th out of 22, ahead of France and Spain, but behind countries with smaller or similar populations like Lithuania (64 .LT domains per 1,000 people), Norway (141 .NO domains) and Denmark (234 .DK domains).

Commenting on the 2017 report, David Curtin, Chief Executive of IEDR, said: “The .IE domain remains the preferred online address and a powerful digital tool for businesses, organisations and individuals in Ireland. A .IE domain is immediately identifiably Irish, and is recognised as authentic and trustworthy.

“More than two-thirds of new .IE domains in 2017 were registered by businesses, a 6 percent increase on the previous year. This signals a strong, growing economy with enterprises that have the confidence and willingness to invest in their online presence and digital processes. Online address registrations are often recognised as a forward indicator of economic growth and entrepreneurship.

“Encouragingly, .IE domain registrations are spread out across the country. While urban centres dominate the database, we have seen significant year-on-year increases in registrations in Munster, Connacht and Ulster.”

Mr Curtin said: “Eurostat’s recent survey into EU businesses’ web sales ability puts Ireland in the top spot. While this seems like a very positive result, the reality is that the survey excludes the micro-businesses with fewer than ten employees that make up 92 percent of the Irish economy. The survey is therefore not an accurate reflection of Ireland’s e-commerce capability.

“According to IEDR’s most recent dot ie Digital Health Index, a survey of predominantly Irish micro-businesses’ use of digital assets, two-thirds of Irish SMEs with websites cannot process online payments, while 1 in 5 have no online presence whatsoever. We have a lot of work to do at home before we can truly proclaim ourselves European leaders.

“To improve Ireland’s digital capabilities, we are calling on the Government to collaborate with industry and roll out a national campaign focused on teaching micro-businesses essential digital skills. Robust broadband for rural communities must also be prioritised. In Connacht and Ulster, a quarter of SMEs report a ‘poor’ or ‘very poor’ internet connection.”

IEDR anticipates continued growth nationwide in 2018 as registration of .IE online addresses becomes easier and faster. After March 2018, any individual or business with a provable connection to Ireland will be able to register any available .ie online address on a first-come, first-served basis. Businesses, townlands, parishes and clubs are expected to be interested in the changes. Citizens will be able to register nicknames and short names for the first time.

Blacknight is currently offering a free .IE domain name for a year when you buy a year’s web hosting or BaseKit subscription.