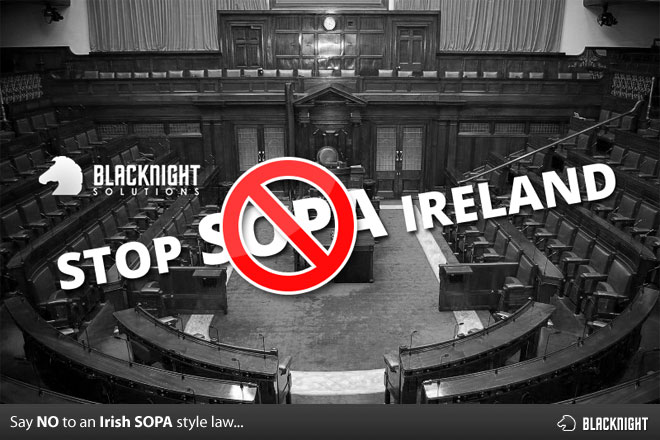 We didn’t like it and it was pretty clear that a lot of internet users weren’t too happy about it either.

However SOPA was being debated openly in Congress. There was discussion. There were public hearings. There was also a massive backlash of public opinion, but that is one of the beauties of democracy.

We are an internet company not a political lobbying group, but this is not the first time that I’ve written a post for our blog where I’ve used that word.

It’s a word that many of us take for granted.

It’s a concept that many of us cherish, even without realising it. I guess the definition kind of explains that:

In Ireland, however, it appears that we will not be given the opportunity to engage in a public debate about the introduction of very similar legislation to the now defunct SOPA.

The Minister, in this case Sean Sherlock, appears to be trying to introduce the legislation via ministerial order. What that means is that our public representatives won’t even be given the opportunity to vote on it, never mind actually debating it.

What is the legislation going to say exactly?

This is part of the problem. We know that the Minister intends to sign it into law, but the exact wording of the legislation hasn’t been shared. TJ McIntyre has provided an FAQ for those of us who have difficulty translating legal English into something we can actually understand and relate to.

It is probably going to be based on text similar to this:

3. The Act of 2000 is hereby amended by the insertion of the following subsection after subsection (5) of section 40:

What that translates into in plain English is that we, a hosting provider, could be held liable for a copyright infringement that we knew nothing about. Of course it goes further than that, as it could be (ab)used and force us, and others in industry, to either block access (filter) your internet connection or disable access to entire websites and domains. Or taking it further, if a rights holder found an infringing photo on Facebook they could demand that the site be blocked!

Ireland has a healthy digital economy, an economy that we at Blacknight are proud to be part of. International companies such as Google, Facebook, Amazon, Ebay, Paypal and many many more have chosen Ireland as their European home. The introduction of this sort of legislation without proper debate and discussion and without the full ramifications of the legislation being considered could only have  negative impact on the digital industry and the Irish economy as a whole. Innovation in a digital age should be allowed to flourish. Intellectual property rights holders are, of course, entitled to protections, but those protections should not be granted at the behest of freedom of speech and unreasonable impact on others.

With that in mind several of us have got together to organise a petition to the Minister to ask him NOT to enact any legislation at this time.

If you want to find out more please head over to Stop SOPA Ireland.

Any questions or feedback? Let us know via the comments