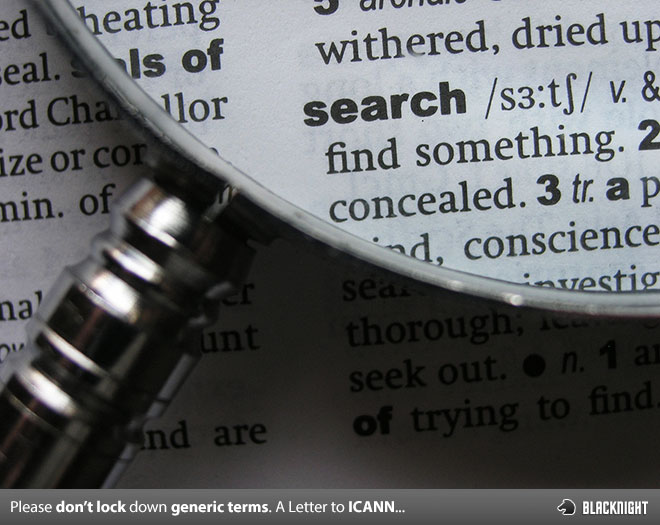 Back in September a number of domain name industry leaders, including ourselves, wrote to ICANN to express our deep felt concerns about some companies declared plans for generic domain name extensions.

We have sent ICANN another letter this week, which is included below and are also distributing a press release about it today.

Blacknight and fellow signatories of the letter seek clarification on non-trade marked generic key word TLDs, specifically whether ICANN will allow them to be operated in a “closed” manner. The most recent version of the “Registry Operator Code of Conduct” states that any applicant who wishes to operate a closed TLD would file an exception request to operate the TLD thusly.

The letter encourages ICANN to consider the adoption of a process in which applicants who wish to operate a closed TLD, meet certain, transparent criteria.
The letter suggests that to gain an exception, a registry must only use the TLD for its exclusive use, not make domain names available for public registration and provide proof that “application of this Code of Conduct to the TLD is not necessary to protect the public interest.”

While there are several issues regarding New gTLDs that remain unclear, this issue most directly affects the public.

Michele Neylon of Blacknight explains: “As a community, we supported a program that would expand the name space for competition, to further the Internet and to provide a broader choice for our customers. Our collective aim is to help the Internet into this next stage, not to take generic key words that essentially belong to “everyone” and tie him or her up.”

The letter states that an exception should be made only if: “The trademark to which the .brand is an identical match is the subject of trademark registrations of national effect in at least three countries in each of at least three of the five ICANN regions, for first round applicants, the registrations of national effect must have been issued on or before June 27, 2008, and the trademark is otherwise eligible for inclusion in the Trademark Clearinghouse.”

Kathy Kleiman of Fletcher, Heald & Hildreth who is also a signatory observed: “a number of applications seek to run ’generic word’ strings in a completely closed and vertically integrated fashion. Those who have signed the letter wish to see ICANN resolve the ambiguity surrounding these applications consistent with the limited scope of the exception, and provide clarity for New gTLD applicants.”

Blacknight has sent a previous letter in September 2012 to ICANN expressing concern that it is generally understood that new gTLDs would be operated in a closed manner only under very defined circumstances.

The ICANN board will meet to discuss this and other New gTLD issues in the coming week.

You can find the letter here.

(Original Image: Find something from BigStockPhoto.)