Blacknight Does Not Support SOPA

Blacknight Does Not Support SOPA 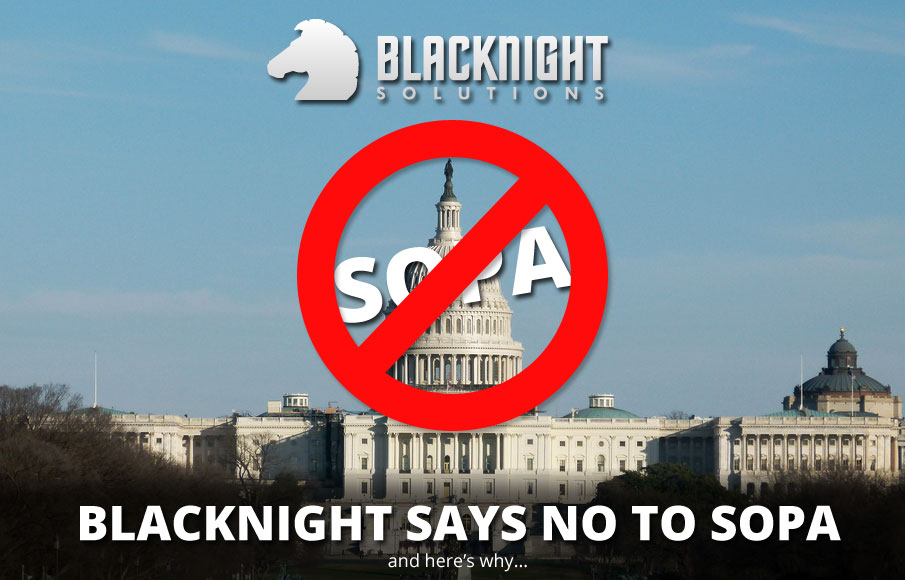 We’ve always been strong believers in striking as sane a balance as possible between privacy, freedom of expression and protection of both 3rd parties’ rights and due process.

We maintain good relations with law enforcement, government and the security community.

We take our responsibility as a good corporate citizen in the internet ecosystem very seriously.

However, we also are very strong believers in that very same ecosystem. In the power and freedom and that the internet has brought to us all and we oppose any attempts to undermine it. It is an unfortunate reality that all too often the well intended spirit of legislation gets perverted by the interests of big business.

I thought our stance on this was pretty clear, as we were quite outspoken about Eircom’s agreement with IRMA, as well as the entire IRMA vs the ISPs debacle.
But over the last week we have received a number of requests for clarification from both existing and potential clients, so I thought it best to set the record straight.

Blacknight does not support SOPA.

We never have and we never would have.

Granting any entity the power to unilaterally remove entire domain names from the internet without a proper judicial process is an incredibly dangerous concept. Demanding that ISPs block access to domain names is censorship.

Of course it’s understandable how we got here.

The debate about taking down websites and domains has been going on for quite some time, but suffers from one incredibly large flaw. It commingles IP rights (civil) with fraud and other serious crimes.

There is a very large difference between serious crime and IP rights infringements. Yes, there are times when the two go hand in hand, but a much more narrowly targeted bit of legislation would probably have done a much better job. If, for example, the legislation focused on fake pharmaceuticals that have led to actual deaths and ONLY targeted websites that sold them, then it would be very hard to argue against it. If you have a look at the supporters of the bill it’s pretty clear where their interests lie.

And legislation like SOPA is incredibly dangerous. It doesn’t matter if you are an Irish or French or German website owner. If you are using a domain name that is controlled by a US entity ie. any domain under  .com, .net, .org and .biz, then you could be impacted.

Unfortunately the wording of the bill is such that innocent website owners could easily get caught in the crossfire. And it’s not a case of the hosting provider or even the DNS provider pulling the domain name or its related services. The US government moved beyond that quite some time ago and is now quite content to go directly to the registry operators ie. the companies that are at the top of the “food chain” and actually put the domains into the DNS.

If you haven’t read up on SOPA then Dave Piscitello’s link dump here is well worth perusing.

So in case it’s not clear. Blacknight does NOT support SOPA.